At the end of March I spent a week with my wife on holiday on the Canary Island of Gran Canaria. We just wanted to escape the German dirty weather and spend a cheap week in the sun and warmth. First I had compared at Check24 the prices of package tours and the best prices for a flight from Frankfurt to Las Palmas and 1 week hotel for 2 persons were about 1200 euros. 600 Euro per person for a 4 1/2 hour flight plus hotel sounds quite cheap. But I thought I’d check what it would cost me if I booked the flight and the hotel separately. So I checked the website of Ryanair to see what the flights cost. Ryanair has been flying directly from Frankfurt Airport (FRA) for about 2 years. The return flight cost 110 Euro per person. Wow, that’s quite cheap.
Now I still looked for the hotel, which I would have gotten with the cheapest package tour. It’s called Catalina Park and costs just 282 Euro for one week. So the whole trip costs us about 500 Euro, so 250 per person. Together we saved 700 Euro compared to the package tour.

We have never been to Gran Canaria or one of the other 7 Canary Islands before. Both of us have never flown with Ryanair before. So we were curious what to expect. 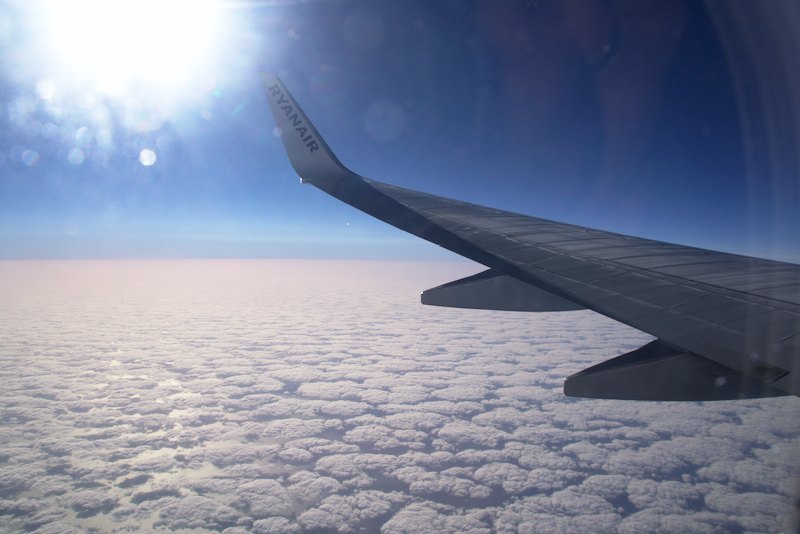 View of a thin cloud layer over the Atlantic

Our plane started on time at 6:30 am in Frankfurt International and we arrived in Las Palmas around 10 am local time.
The flight was pleasant and I could not notice any big differences to other airlines. However, one should be aware of the fact that Ryanair only allows one very small bag free of charge on board (40cm X 25cm X 20cm). For larger hand luggage you pay a surcharge. In general, Ryanair charges extra for everything. As we had breakfast and can hold out for 5 hours without eating, we did not eat anything in the plane.
The seats at Ryanair are not quite as soft as those of other airlines and made of an easily washable, smooth material. There is no net on the back of the front seat, so you are forced to put all your stuff on the floor. 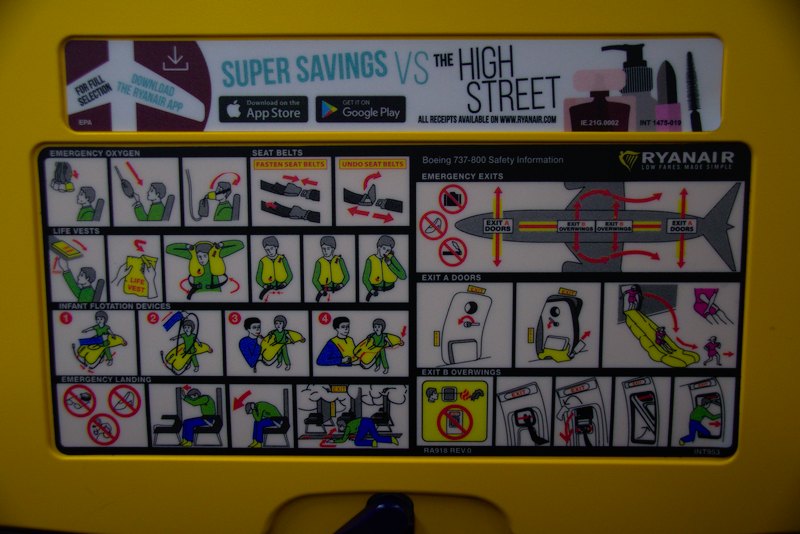 No net on the backrest, so the warnings are printed on the seat.

Gran Canaria has good public transport. Bus #60 from Global runs every 30 minutes from the airport to Las Palmas. If you have to go downtown, you should get off at the Juan XXIII stop. But our hotel was further north and we got off at the stop Estación Santa Catalina. From there it was a 15 minute walk to the Hotel Catalina Park. The bus ride to Santa Catalina only costs €2,95. So you definitely don’t need to book a package tour with bus transfer here. The ticket is simply bought from the driver. This also works if you don’t speak Spanish, as we do.

Meanwhile it was about 11 o’clock and our room was not prepared yet. But we could put our bags in an adjoining room and come back an hour later. We did that and went to the beach promenade and had lunch before we moved into our room. The hotel receptionist was not the friendliest person under the sun and during our stay he hardly ever looked up when we passed the reception.

The room and the bathroom were clean, but a renovation could not hurt in the foreseeable future. In our room there was a kitchen with 2 hotplates, fridge and sink. The light switch to the kitchen was behind the sliding door and we searched like stupid for it first. You can only find it when the kitchen door is closed.

The beach Play de Las Canteras is only 3 minutes walk away. Near the hotel there are numerous supermarkets, restaurants, cafés, bars and shops. Those who do not care too much about luxury are in good hands in this hotel. The location is really good.

View from the balcony towards the beach from Hotel Catalina Park. 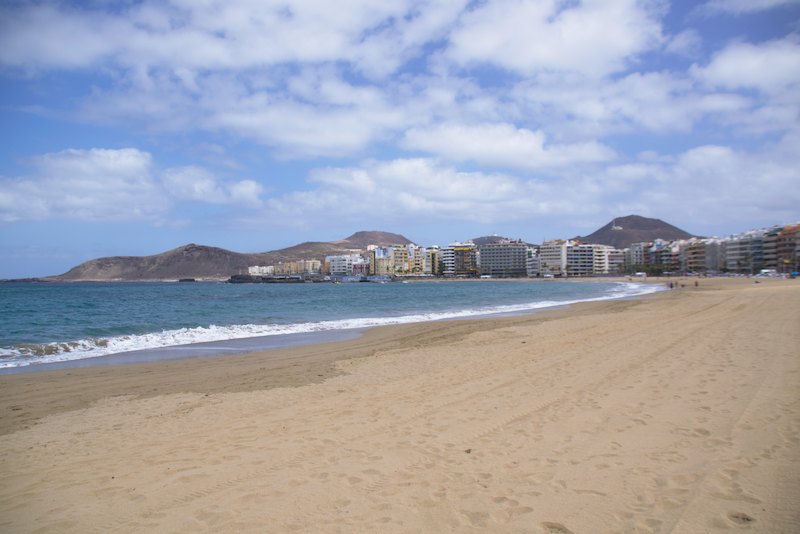 The beach of Playa de Las Canteras is about 3km long and you can stroll along the promenade and enjoy a delicious paella with a good glass of wine in one of the numerous restaurants. Those who would like to try surfing can join one of the numerous surf schools. At the southern end of the beach is the Alfredo Kraus Auditorium and opposite the Centro Comercial Las Arenas Shopping Mall. Here there is a big supermarket of Carrefour and many shops like Vans, Adidas, Primark, Douglas, C&A etc.

My tips in Las Canteras:
Garage 32: Nice little bar where you can play billiards and darts. The staff was very nice and the selection of beers is good. We had paid €3,00 for a big beer.

100 Montaditos: Here one gets small filled baguettes with endless many variations starting from €1.00. A big beer costs €1.50 and you can either sit inside, or outside on the beach and enjoy the sunset. There are small notes at each table on which you tick what you want to have. So you can study the menu in peace. Then one goes with the note to the cash desk and pays before the meal. When the meal is ready, you are called. 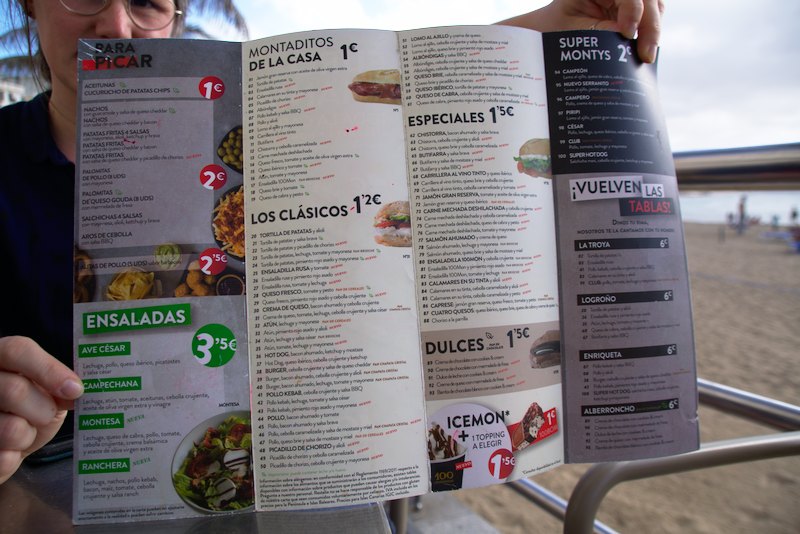 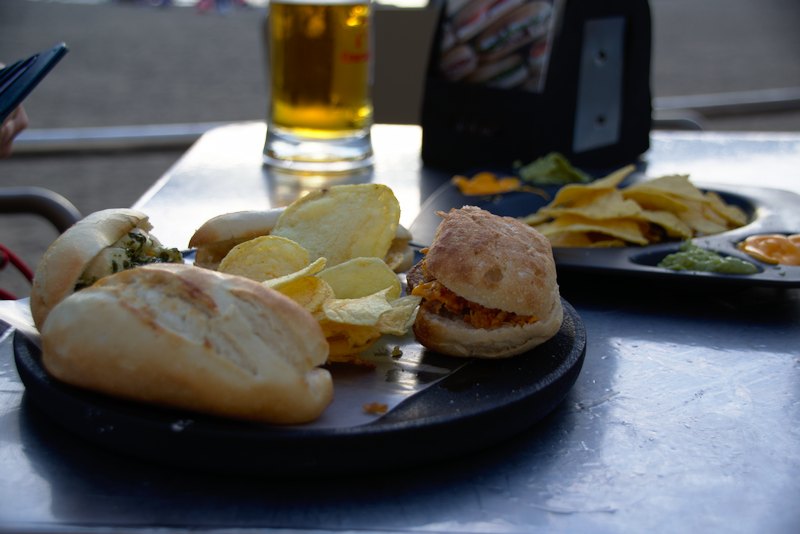 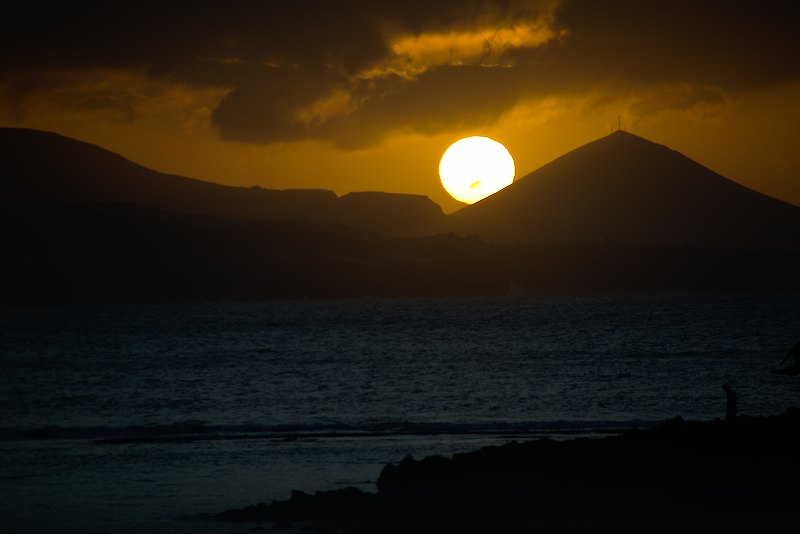 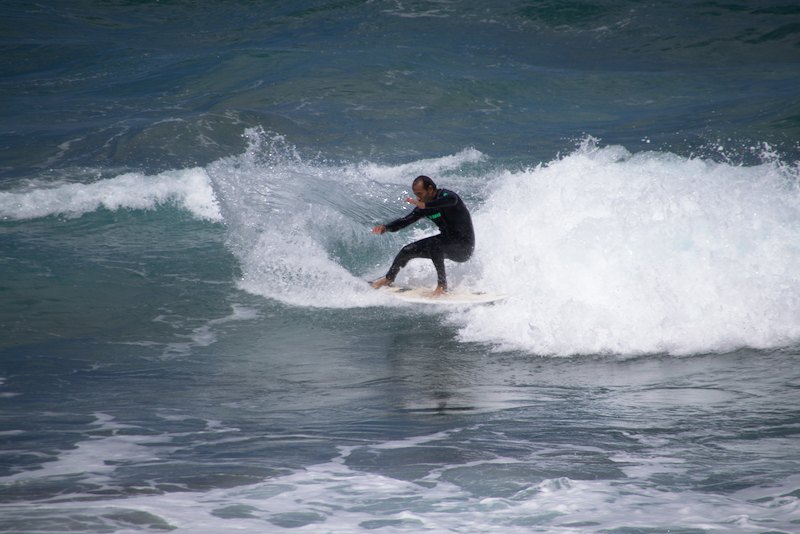 There are a lot of Restaurants offering Paella. Unfortunately I forgot where we went, but we had such a yummy Paella for two plus a bottle of Wine for a very good Price right at the Beach Walk. So if you’re there you should try the Paella in on of those Restaurant.

From our hotel in Las Canteras you have to walk about 30 minutes to get to the city centre of Las Palmas. We were there in the market hall Mercado de Vegueta, which I recommend to visit if you want to buy some fresh fruits, vegetables, fish and meat. We also visited the Catedral de Santa Ana, which is als worth to have a look at. 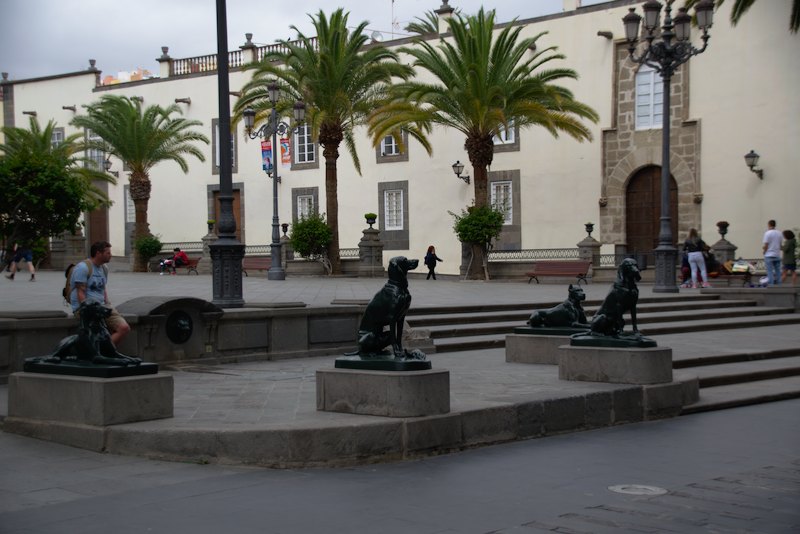 Dogs sculptures in front of the Catedral de Santa Ana. 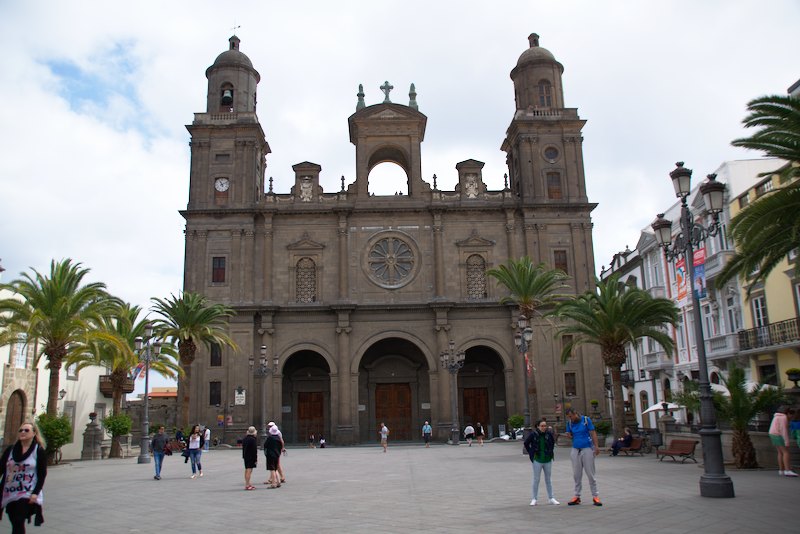 We then walked back by foot on the other side where the harbor is. Here you can see a lot of industry, cargo ships, drilling rigs and so on.
We started here and simply walked on the Ocean Walk to here. Google Maps doesn’t show it, but you can walk on the right side of the Av. de Canarias. It’s not really beautiful, but a great place for running, cycling and walking. 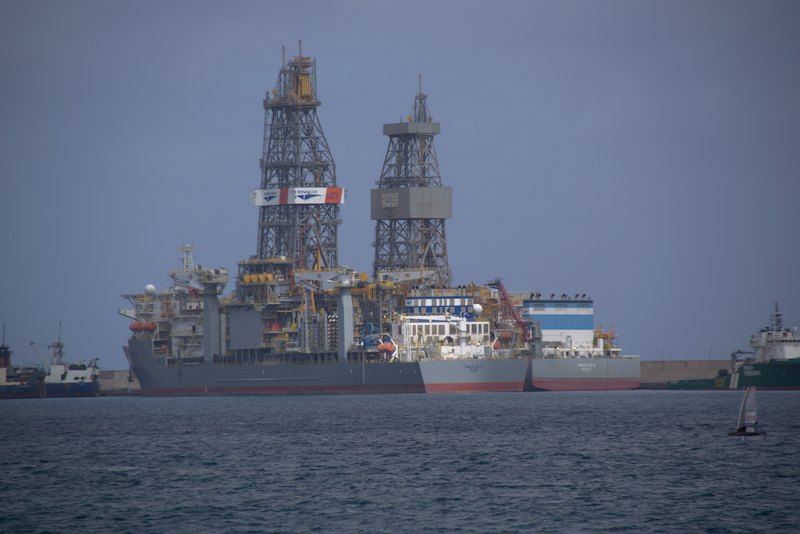 We had already planned at home to take a rental car for the last 3 days of our trip in order to explore the island a little and booked it via Check24 before departure. I had picked out the best deal without excess in case of damage and fair fuel regulation and paid just €32.00 for 3 days for it.
The car rental Orlando is not located in the airport terminal but about 10 minutes away by car. So we first had to find an employee in the airport who organized a driver for us to rent a car. On the spot they did not want to give us the car without a deductible and we paid another 15 Euro to get rid of the deductible. Not the world, but in the price comparison there was something else, that’s why I will try to get the 15 Euro back from Check24.
But there was nothing wrong with the car and the return went smoothly.

Since we were now mobile, we drove of course with the car into the south. Here it was about 3-5 degrees warmer than in Las Palmas and not a cloud in the sky. In the north of the island it was almost always cloudy and a bit too cold for my taste. This seems to be almost always the case, therefore the place Maspalomas is full of tourists, while in Las Palmas and on the beach of Las Canteras one meets many locals. If we should come to Gran Canaria again, then it goes straight to the south. When we were in Maspalomas, it was carnival. 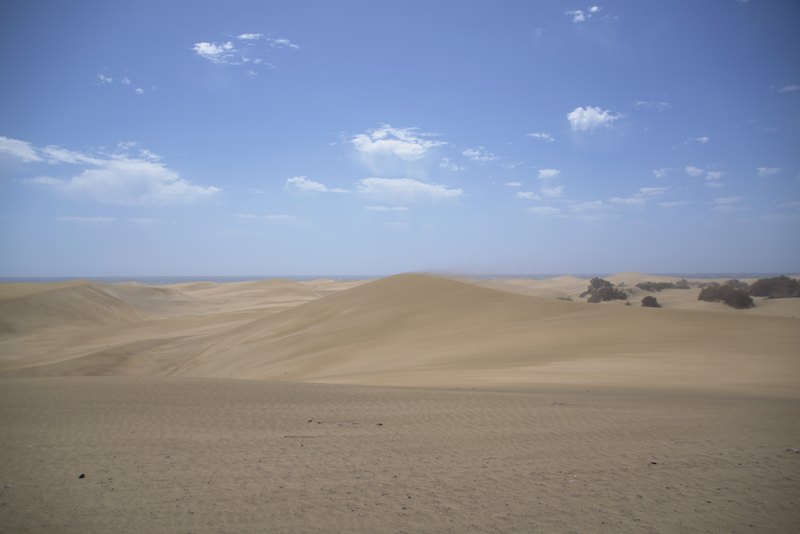 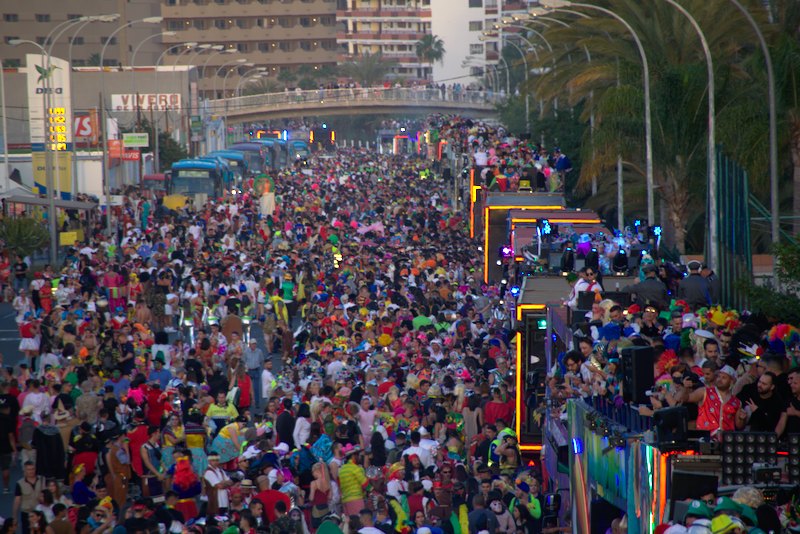 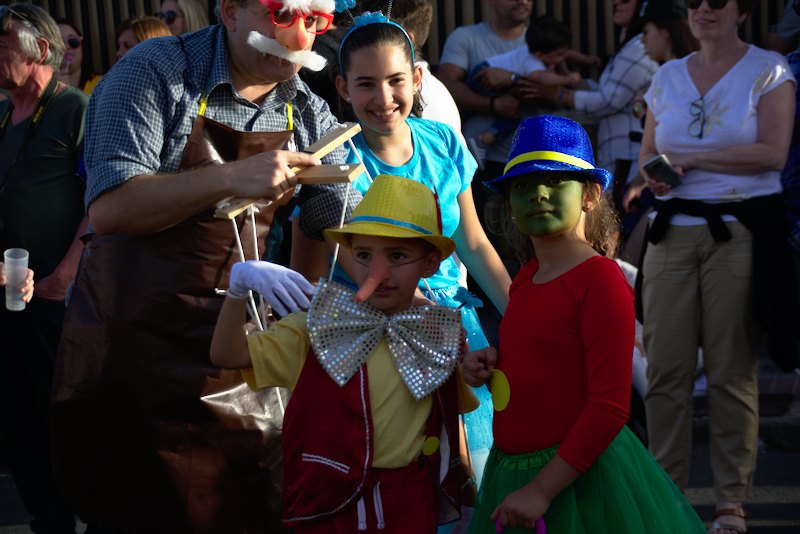 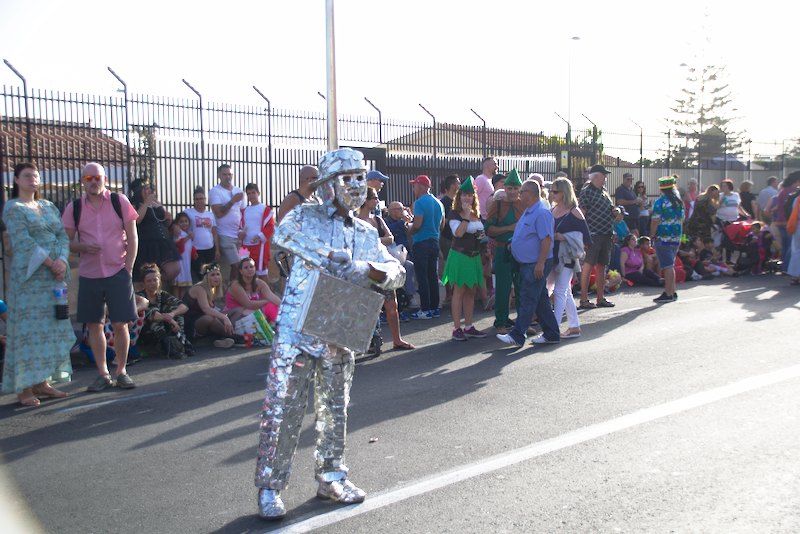 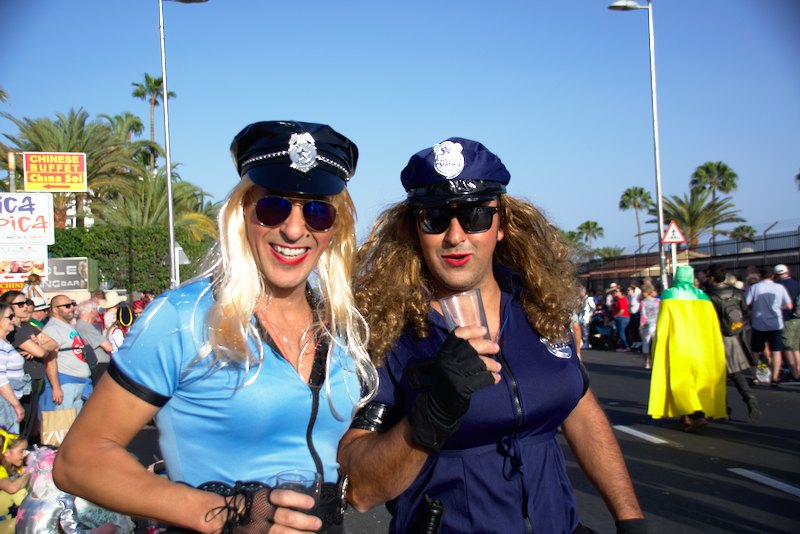 Since the weather is much better in the south of the island, I wouldn’t spend another vacation in Las Palmas. Then I would rather go to the south to one of the sunny places like Maspalomas, Arguineguín or Puerto Rico. With the public transport one gets wonderfully from A to B, therefore a rental car is absolutely not necessary. On the first day we looked for a parking place in Las Canteras with the rental car for almost 45 minutes and then had to walk another 30 minutes to the hotel. That makes absolutely no sense. It’s better to take the bus that allows you to travel around half of the island for 3 Euros.